You are here: Home / Runners Life / 10 Great Moments from the Last 40 Years of the Boston Marathon 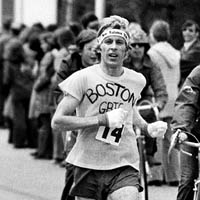 What’s your favorite detail from the first of Bill Rodgers’ four Boston wins? The shirt he pulled from a trash can and hand lettered with his club’s name? The new shoes that he wore, a promo sample from an upstart company called Nike that were sent to him by Steve Prefontaine? The lowering of his personal best from 2:19:34 to 2:09:55? The stops to tie a shoe and drink water? read the rest of this article…..