You are here: Home / Oracles of Time / Alberta sun temple has 5,000-year-old calendar 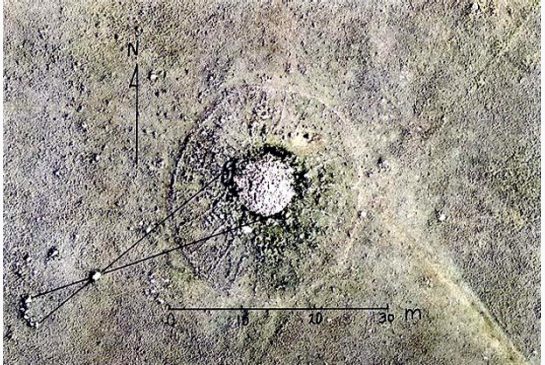 An aerial view of a 5,000-year-old stone cairn and other structures in southern Alberta that a maverick Edmonton scientist believes are the central features of an ancient sun temple and calendar that accurately marks the solstices and the equinoxes.

Mainstream archeologists consider the rock-encircled cairn to be just another medicine wheel left behind by early aboriginals. But a new book by retired University of Alberta professor Gordon Freeman says it is in fact the centre of a 26-square-kilometre stone “lacework” that marks the changing seasons and the phases of the moon with greater accuracy than our current calendar.

The central cairn is surrounded by 28 radiating stone lines, four of which align with the cardinal points of the compass. Those lines are encircled by another ring of stones.

The rising and setting sun on both the longest and shortest days of the year lines up precisely with V-shaped sights in the temple’s rocks. The spring and autumn equinoxes, when day and night are equal, are similarly marked. They are not the equinoxes of the Gregorian calendar currently used, however, but the true astronomical equinoxes. read the rest of this article…..