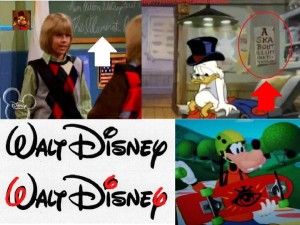 I’m not trying to prove the existence of the Illuminati with this article. I just wanted to point out a few interesting observations. This episode of Disney’s “Ducktales” was aired in the 1980’s. Although some of Earths population was aware of the illuminati back then, the masses were still unaware. Today is a different story, more and more people are waking up to the fact that the same group of people and the corporations they run are in control of our media, energy, health and financial industries. As to whether they are involved in occultism is where many people seem to draw the line. In this case, we are dealing with Walt Disney. The Walt Disney Corporation is controlled by Fidelity Investments, they are the largest shareholder. (1) You can view the episode clip below and can see the poster on the wall at the beginning, 0:14, 0:29 and 1:03. I thought this one connection, of many other connections, might make people scratch their heads and keep an open mind.

The masses are truly beginning to awaken to the existence of such societies, who runs them and what they do. We can also see clearly that the ones who call the shots do not really have our best interests at hand. It is also evident that the Illuminati are aware of the mass awakening occurring on the planet .  They are well aware that their ‘secret’ isn’t a secret anymore and they continue to push forward with their desired agenda. Disney does not use as much blatant symbolism in scenes as they did in the past. Possibly because back then, many people were still unaware of their existence were not sure what to look for in terms of symbolism. Both clips from this article are from the 1980’s, not many children would easily recognize what is going on in those cartoons. read the rest of this article…..