You are here: Home / Runners Life / Everything We Know About Running Was Discovered in 1937

Everything We Know About Running Was Discovered in 1937 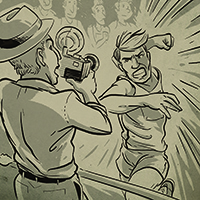 The most prolific winner in Boston Marathon history was also its most prescient. Clarence DeMar, who won Boston seven times between 1911 and 1930, was a self-coached but systematic and inquisitive runner. In April 1937, DeMar—who also won a bronze medal in the 1924 Olympic marathon—espoused his views in a memoir titled Marathon. Written long before a participatory running culture in the United States existed—“How does it feel to run a marathon?” is the title of one chapter—Marathon is aimed at the 1930s reading public, to whom the idea of running 26.2 miles was akin to flying an airplane around the world: a risky venture attempted by few. Yet some of his theories on training and exercise in general presaged what would become accepted practice generations later.

DeMar was opinionated, which makes his book lively, and he had a temper, particularly in the midst of a race. He was known for taking swings at spectators who broke his concentration during the course of the BAA Marathon—where his consistent victories inspired Boston reporters to dub him “Mr. DeMarathon.” read the rest of this article…..