You are here: Home / General Stuff / Get over the stranger danger and join the free-rangers

Get over the stranger danger and join the free-rangers 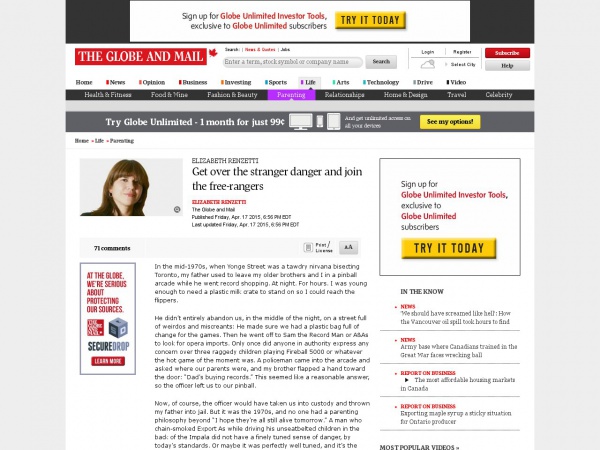 In the mid-1970s, when Yonge Street was a tawdry nirvana bisecting Toronto, my father used to leave my older brothers and I in a pinball arcade while he went record shopping. At night. For hours. I was young enough to need a plastic milk crate to stand on so I could reach the flippers.

He didn’t entirely abandon us, in the middle of the night, on a street full of weirdos and miscreants: He made sure we had a plastic bag full of change for the games. Then he went off to Sam the Record Man or A&As to look for opera imports. Only once did anyone in authority express any concern over three raggedy children playing Fireball 5000 or whatever the hot game of the moment was. A policeman came into the arcade and asked where our parents were, and my brother flapped a hand toward the door: “Dad’s buying records.” This seemed like a reasonable answer, so the officer left us to our pinball.

Now, of course, the officer would have taken us into custody and thrown my father into jail. But it was the 1970s, and no one had a parenting philosophy beyond “I hope they’re all still alive tomorrow.” A man who chain-smoked Export As while driving his unseatbelted children in the back of the Impala did not have a finely tuned sense of danger, by today’s standards. Or maybe it was perfectly well tuned, and it’s the standards that have gone haywire. read the rest of this article…..