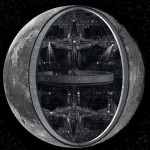 The Moon, An Artificial Base; Who Put The Moon In A Perfect Orbit Around Earth? May 26, 2015 - Apparently the moon is a terraformed, engineered piece of hardware, with a 3 mile thick outer layer of dust and rock, which has, below this layer, a thick solid shell of around 20 miles made of highly resistant materials such as titanium , uranium 236, mica, neptumium 237. Not what you would expect to find “inside” the Moon. Despite six visits announced by US astronauts between 1969 and 1972, the Moon remains an enigma for scientists in many aspects. The solutions to these riddles may indicate an alien aspect of our familiar Moon. Called “the Rosetta … END_OF_DOCUMENT_TOKEN_TO_BE_REPLACED