You are here: Home / Conspiracy Stuff / The Moon, An Artificial Base; Who Put The Moon In A Perfect Orbit Around Earth?

The Moon, An Artificial Base; Who Put The Moon In A Perfect Orbit Around Earth? 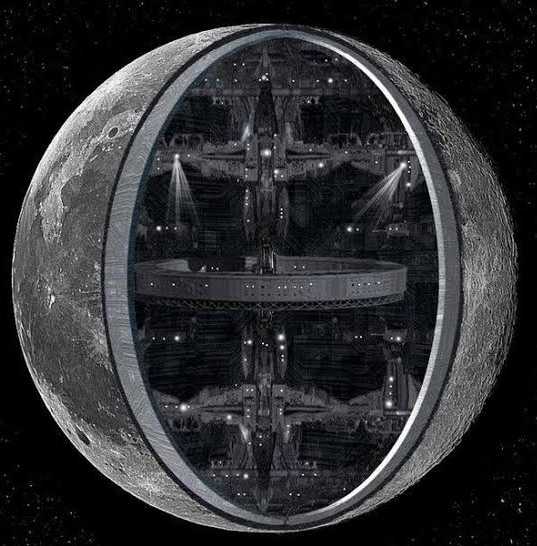 May 26, 2015 – Apparently the moon is a terraformed, engineered piece of hardware, with a 3 mile thick outer layer of dust and rock, which has, below this layer, a thick solid shell of around 20 miles made of highly resistant materials such as titanium , uranium 236, mica, neptumium 237. Not what you would expect to find “inside” the Moon. Despite six visits announced by US astronauts between 1969 and 1972, the Moon remains an enigma for scientists in many aspects. The solutions to these riddles may indicate an alien aspect of our familiar Moon. Called “the Rosetta Stone of the planets” by Dr. Robert Jastrow, the first president of NASA’s Commission of Lunar Exploration, scientists hoped to understand the composition and formation of the moon and solve some of the mysteries of how our planet and solar system came into existence. However, six lunar landings later, science writer Earl Ubell said: “… the Moon remains a mystery. The Moon is more complicated than anyone expected, is not just a frozen billiard ball in space and time, as many scientists had believed. The Moon is far older than imagined, some have ventured out to say that it might well be older than planet Earth. The Moon has at least three distinct layers of rock. Contrary to the idea that heavier objects sink, heavier rocks are found on the surface. And there is a gap defined in the distribution of minerals.The moon is very dry and it does not seem that it had, at some point, substantial amounts of water. None of lunar rocks, regardless of where they were found contained traces of water or even water molecules bound to minerals. Apollo 16 astronauts found rocks containing pieces of rusty iron Since oxidation requires oxygen and free hydrogen, this rust indicates that water should be somewhere on the moon.Strangely, instruments left by the Apollo missions sent a signal to Earth on March 7, 1971, indicating that “wind” containing traces of “water” had swept across the lunar surface. Since the water on the surface without air is vaporized, it behaves like wind on Earth, the question was where this water originated.Ubell asked an interesting question;If the Earth and the moon were created at the same time, close to one another, how come one body, the Earth has great amounts of Iron, while the other body, the moon, has very little of it. Astrophysicists are unable to explain exactly how the moon became a satellite of Earth.Magnetized moon rocks were found, not strong enough to pick up a clip but they were nevertheless magnetic in nature. But, there is no magnetic field on the moon, so where did the magnetism come from?Evidence suggests that the moon may be hollow. Moon rocks studies indicate that the interior of the moon differs from the mantle of the Earth in ways that suggests the presence of a very small core, even though some suggest the Moon might not have a core at all. 1962, NASA scientist Dr. Gordon MacDonald stated, “If the astronomical data are reduced, it is found that the data require that the interior of the moon be less dense than the outer parts. Indeed, it would seem that the moon is more like a hollow than a homogeneous sphere.”The significance was stated by astronomer Carl Sagan way back in his 1966 work Intelligent Life in the Universe, “A natural satellite cannot be a hollow object.”The most incredible evidence that suggests the moon could be hollow came on November 20, 1969, when the Apollo 12 crew, after returning to their command ship, sent the lunar module ascent stage crashing back onto the moon creating an artificial moonquake.The LM crashed into the surface about 40 miles from the Apollo 12 landing site where ultra-sensitive seismic equipment recorded something both unexpected and astounding – the moon reverberated like a bell for more than an hour. The vibration wave took almost eight minutes to reach a peak, then decreased in intensity, something no one had expected to occur.Experts were even more surprised about the moon when lunar rocks were found with traces of bronze, mica, amphibole and almost pure titanium. According to the Argonne National Laboratory, uranium 236 and neptunium 237-elements that were not previously found in nature-were discovered in moon rocks. Scientists were baffled when they discovered the presence of rustproof iron particles in a soil sample from the Sea of Crises. ( via ancient-code.com ) read the rest of this article…..