You are here: Home / General Stuff / Why Is Earth’s Schumann Resonance Accelerating?

Why Is Earth’s Schumann Resonance Accelerating? 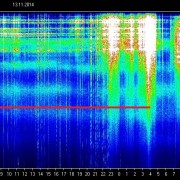 The Ancient Indian Rishis called 7.83 Hz the frequency of OM. It also happens to be Mother Earth’s natural heartbeat rhythm, known as the “Schumann Resonance.” According to Wikipedia, “Schumann resonances are global electromagnetic resonances, excited by lightning discharges in the cavity formed by the Earth’s surface and the ionosphere.”

For many years this resonance frequency has hovered at a steady 7.83 Hz with only slight variations. In June 2014 that changed. Monitors at the Russian Space Observing System showed a sudden spike in activity to around 8.5 Hz. Since then, they have recorded days where the Schumann accelerated as fast as 16.5 Hz. (The graph is usually blue with some green, and no white.) At first they thought their equipment was malfunctioning, but later learned the data was accurate. What was happening?

The Earth frequency was clearing speeding up. Since the Schumann frequency is said to be “in tune” with the human brain’s alpha and theta states, this acceleration may be why it often feels like time has sped up and events and changes in our life are happening more rapidly. read the rest of this article…..